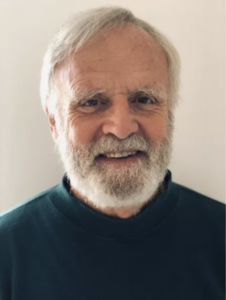 Steven Acuff, began eating organic, whole foods in 1971 and has lectured in 27 countries and worked as a nutrition coach since 1979. Steven had a study centre for natural food education in Sweden from 1984 to 1998. He also worked as a consultant at a medical clinic in Kassel, Germany from 1988 to 1993. In 1989, Steven wrote a book about food and health in German, Das Makrobiotische Gesundheitsbuch, which was published in nine editions. The book was also published in Swedish, På Kornet. His latest book (in English) Eating the Wu Way – for a longer, healthier life will be available at the event. Steven lives half the year in Sweden and half in Australia.

For a long time, we as a society have been fixated on science and head-dominated logic with scientific explanations. This one-sided approach has weakened our intuitive clarity and holistic understanding of the world around us. We know scientifically what makes us overweight and unhealthy, but we keep doing what we shouldn’t, and now have an enormous crisis in both physical and mental health.

The perspective of nutrition science is narrow, as it focuses on measuring the physical world and drawing conclusions based on this. Of course, we need science, but we also need to understand the role of man’s food traditions and the energetic, intuitive perspective known for thousands of years in the Far East.

By integrating seemingly separate dimensions of life, i.e. the physical, the mental and the spiritual, we see connections which help us to understand ourselves better, as well as the world around us. This enriches our life experience with new insight and solutions to life’s problems.

Daoism is the philosophy of polarity as opposite phenomena that complement each other to make the whole. As a Daoist sees it, the most obvious polarity is man-woman, male-female, Yang-Yin. Man represents the Yang, the more active, outgoing energy, while woman expresses the Yin, the more passive, gentle energy. Father disciplines the child and mother nourishes the child, creating balance.

The body is the Yang expression of human life, and the mind is the Yin. The body has outward form, is visible and is limited. The mind is invisible and cannot be measured like the body, and is unlimited. The soul is uniquely human and to progress spiritually, needs healthy impulses from both the body and the mind.

Eating wholesome food supports not only physical health, but also mental health, as the brain and central nervous system are physical organs. The gut, called ‘The Second Brain’, the title of a book by Michael Gershon, MD, of Columbia University in New York, has more nerve cells than any other part of the body except the main brain. The health condition of this second brain has a great impact on thinking and the psychological state, which in turn strongly affects the ability to maintain balanced thoughts. This supports the mental harmony needed for the path of spiritual growth and clearer intuition. In a nutshell, the quality of daily food is a key factor in the integrity of the nervous system, which connects body and mind.

The Daoist concept Wu Wei means literally not doing, no action, without effort. Man should do nothing that disturbs the natural connection to the order of nature, the Dao. Go effortlessly with the flow of nature, as the trees and all nature do.