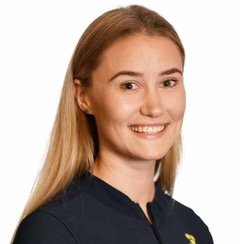 I started playing curling 1999 when my mum found an article in the paper and thought it would be fun to try, as a family activity. I played football alongside the curling until I was 17 years old but then decided to put all my focus on curling. Which Im really glad I did! I love this sport because it’s a team sport, its a very challenging sport for the mind and your focus, it demands a lot of good communication and listening, also the physical part and of course the perfection of technique or touch/feeling. There´s obviously many reasons why I love this sport!

World Womens Curling Championship 2018
Silver medalist – This was by far the most challenging championship I ever played. After winning the Olympics in February the team was very, very tired. We are super proud over winning the silver just three weeks after Pyeongchang.

Olympic Games 2018
Gold medalist – this is the biggest thing I´ve ever done, in so many ways!

European Curling Championship 2016-2017
Silver medalist – Came second both 2016 and 2017. Since we put this team together we have played 2 out of 3 euros and have placed second both times. The first time we should have won the gold and was very disappointed in ourselves for not winning. This season we very much felt we won a silver.

Universiade 2015
4th place. This is like a small version of the Olympics but for students. We played in Granada, Spain.

World Junior Curling Championship 2009-2013
Gold medalist in 2010. Then some mixed results between 4th place and 5th place the other championships.