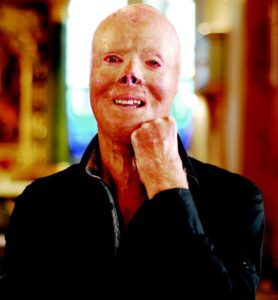 Lasse Gustavsson is a very popular national speaker in both Sweden and Norway, where he inspires people for lifelong development model by referring to his own life journey (see below). Lasse is both a licensed Mental Trainer and a Coach and he and Henrik Mattson has started the first Swedish education to become a licensed Professional Speaker.

Lasse was born in Gothenburg, Sweden in 1956. At age 24 he was a recently graduated firefighter. His first week on duty he responded to a call for assistance to a gas leak that later proved to be a malicious act of sabotage. The fire truck he was riding in drove up too close to the gas pipe. The gas exploded. Twenty tons of propane gas turned into almost 2000 devastating degrees. Lasse ran through the blaze. He lost his hair, his skin, his ears, his fingers. His colleague, Leif did not make it.

When Lasse regained consciousness several months later, he weighed only 90 lbs. – half his weight before the accident; he was badly burned, his lungs were severely damaged, his tendons and muscles were debilitated, his eyes were sewn shut. His last recollection was a cloud of white gas unfolding like a thick mist over the harbor area of Gothenburg.

During his hospitalization, Lasse felt a strong urge to share his experience. He did not know with whom, how or when. All he knew was that his suffering and his awakening would not be meaningless. His gratitude towards all the people who cared for him – nurses and doctors, his family, friends and colleagues – was part of what inspired him.

Two years later Lasse was back at the fire department. After six years he decided to pursue other interests and obtained a grant to study health education, a field that truly captivated him.

His studies led him to India, where his encounter with children freed from slavery made him realize how deeply he desired to make a difference in someone else’s life. This is where his devout speaking career originated.

Lasse’s passion for sports and outdoor activities was also revived. Physical therapy coupled with relentless mental stamina produced outstanding achievements. As an adolescent, Lasse had gone rock climbing in Sarek, a national park of northern Sweden. Only 18 months after the explosion, he amazingly conquered the same mountains…on his own. Shortly after, he completed a 190-mile bike race in 10 hours. A few years later, he ran the Stockholm-marathon and also went skiing in the famous competition Wasaloppet, which consists of 56 miles. Clearly, he could not find a challenge too great.

Lasse had never tried kayaking prior to the accident. He is now a kayaking instructor. He uses the kayak as a tool to teach people how to manage change and overcome adversity as a form of personal development.

Lasse will do his workshop together with Henrik Mattsson and it will be held in Swedish.