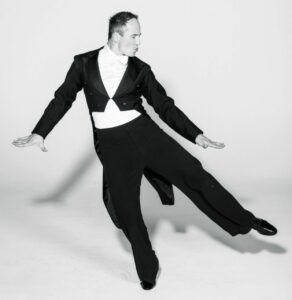 Kristjan started dancing when he was 6 years old with 10-dance. He competed for 12 years and at the age of 18, Kristjan began to work professionally as a dancer and he also began to learn other styles. In parallel with his dance work, he studied full time at the Tallinn Technical University for a civil engineer. An office job never felt right, but Kristjan chose instead to continue her path within the dance. He worked for many years at the vast majority of the Baltic Sea cruise ships and made a couple of great musicals in Estonia, including Miss Saigon and Sound of Music, in Tallinn. With his dance company he also got the opportunity to do shows abroad as in the Philippines and he has even danced on big scenes in Hollywood, LA.

In Sweden, his first job was Rhapsody in Rock with Robert Wells, a show and tour he got to do four times. He has also played a role in the musical West Side Story and has been involved in various songs in the Melodifestivalen for three consecutive years, made the corporate event Christmas show Stjärnklart and advertising assignments for among others Baccardi Worldwide, Philips and So You Think You Can Dance Scandinavia. In 2009, Kristjan met Tony Irving and by chance and has since worked with him and his hook show Lets dance Live. You have also been able to see him as a professional dancer in TV4’s great Saturday entertainment Dansfeber. Kristjan has participated with TV4 success entertainment Lets dance 7 seasons, been twice in the final, four times in the semifinal.